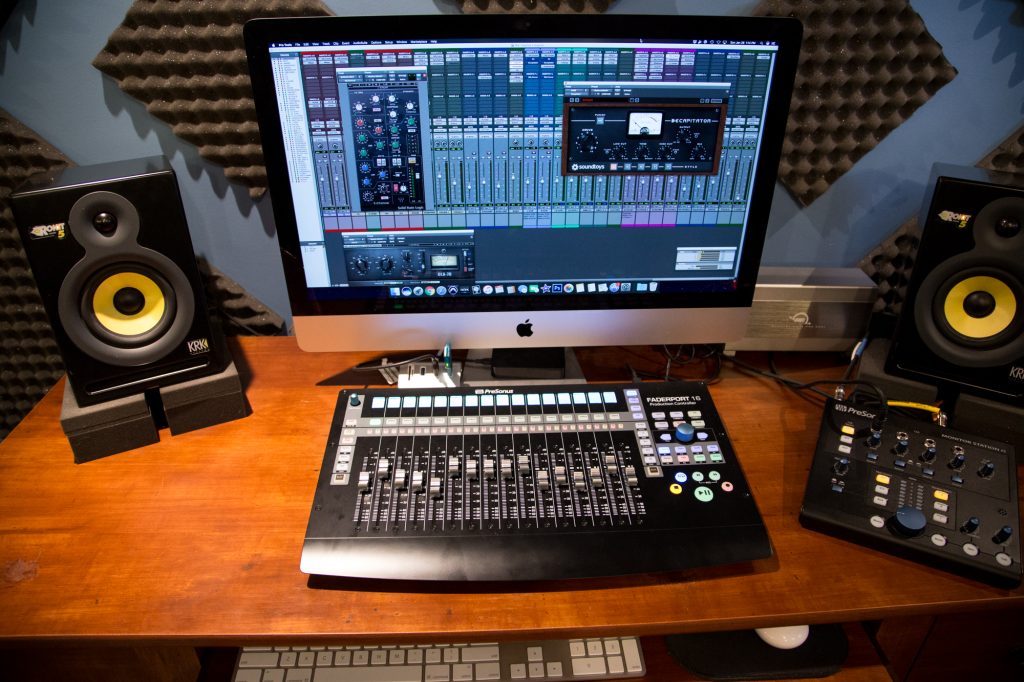 Producer and engineer Ryan Mey is a versatile professional with skills that qualify him as an expert for full album production, tracking, mixing, TV and radio production, live events, audio books and so much more. Starting in 2006, Ryan started recording bands professionally. In 2008, he attended The Recording Workshop in Ohio and became a certified audio engineer/producer. In 2011, Ryan set his sights to Chicago, IL and became an engineer at BOTA Studio and assistant engineer at Electrowerks Recording. At these companies, Ryan was able to participate with signed metal bands including, Born of Osiris, Veil of Maya and more. In 2012, Ryan returned to his roots in West Michigan to start a project studio. He continues his mission to provide high quality music production and audio services to hundreds of clients in the West Michigan area.

All clients will be required to pay a 25% deposit for studio time to lock in the clients date(s). The amount of the deposit may vary. The remaining 75% will go towards the client's total, due on the first day of tracking. All full-production songs are charge per song, unless otherwise agreed upon, There is a 2 hour minimum in order to book time. We also have a 24 hour cancellation policy. If you cancel with less than 24 hours notice, your deposit will be forfeited. If you cancel with 24 hours or more, your deposit will be credited and can still apply to the re-scheduled session. Studio time will be charged per song and studio time will be set to agreed upon days that work for both Ryan and the client. Ex.: 1 song per 2 days tracking. 5 songs = 10 days of tracking Any additional day(s) of tracking needed after the agreed upon day(s) has expired, will be charged at an additonal rate per the rate card. ​For business clients (non-music group), the pricing will be agreed upon before the start of the project.

This website uses cookies to improve your experience while you navigate through the website. Out of these, the cookies that are categorized as necessary are stored on your browser as they are essential for the working of basic functionalities of the website. We also use third-party cookies that help us analyze and understand how you use this website. These cookies will be stored in your browser only with your consent. You also have the option to opt-out of these cookies. But opting out of some of these cookies may affect your browsing experience.
Necessary Always Enabled
Necessary cookies are absolutely essential for the website to function properly. This category only includes cookies that ensures basic functionalities and security features of the website. These cookies do not store any personal information.
Non-necessary
Any cookies that may not be particularly necessary for the website to function and is used specifically to collect user personal data via analytics, ads, other embedded contents are termed as non-necessary cookies. It is mandatory to procure user consent prior to running these cookies on your website.
SAVE & ACCEPT
Price tables